Akila "Kiki" Theoris is a top student at Yasiro Academy. She is best friends with Cleopatra and is a believer in Thoth's prophecies about her.

Akila is a small thin figured, teenage girl from an unknown and now destroyed planet. Her hair color is red and her eyes are green. After book 3 she is left with a metal prosthetic left arm with a wide array of gadgets. including a blaster. Her typical outfit is the Yasiro academy uniform, which consists of a light pink top and a white cheerleader style skirt with hints of gold. The boots look to be white with thick soles.

Akila is very smart and thought through, though she can be hyper at times, she seems to be the only one keeping Cleo from many dangerous scenarios. Akila is an A student and likes to keep it that way, she attends all of her classes and tries to get Cleo to do the same. Whenever a situation arises that requires her to break rules she, unlike Cleo, is very hesitant but if it involves helping or saving Cleo she is all ears. Overall she is a bit bossy but has a truly caring heart. She also adores the school's library and is brokenhearted when it is destroyed. 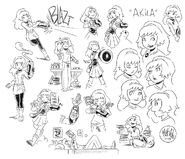 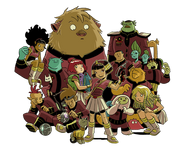