Cleopatra In Space Wiki
Register
Don't have an account?
Sign In
Advertisement
in: Main Characters, Females, P.Y.R.A.M.I.D.,
and 5 more

Pink with white crosses in the center; light pink irises

Part of team with Brian and Cleo

Akila "Kiki" Cleopatra Theoris[1] is a top student at P.Y.R.A.M.I.D. She is best friends with Cleo. She is a pink-eyed fish girl from the planet Vevoson and is the first of Cleopatra's teammates. She loves nature, geeking out, and can become, occasionally, depressed, as is shown in "Paradise Found".

Akila is a small and hourglass-figured, teenage girl whose skin is a few shades of blue. Her pink hair is light pink on top and darker pink underneath. Her typical outfit is the Academy uniform, which consists of a green skirt with grey shoulder guards, blue sleeves, with yellow in-between. She also wears grey pants, a yellow tie in her hair, and blue boots. She also has gills that come out of her head. Additionally, she wears a pink-colored sleeping shirt.

Akila is very smart and has a particular talent for translating unknown, ancient alien languages. She is highly optimistic with a bright and positive outlook on life, even in the face of grim situations. In stark contrast to Cleo, Akila is a highly academic student and strives to excel in each of her classes.

Akila is extremely empathetic, practically to a fault. In "Akila Says No," it is shown that she was completely unable to refuse any request, no matter how unreasonable, up until Cleo and Brian urged her to learn to say "no." In "Eyeball", she refused to treat Eyeball merely as bit of non-existent code, and instead opted to love him like her very own son. Her relationship with Cleo is also quite familial in nature, as the two embrace constantly, which is most often initiated by Akila. However, she is still quite capable of getting very angry and argumentative, as shown in "Cleopatra Needs Space," where she and Brian constantly bickered after their failed date. It is also apparent that she strongly values the relationship she shares with her moms, and felt threatened and upset when they were giving Cleo all of their attention in "School Break," which prompted her to act out in a manner quite uncharacteristic of her so that they would notice her.

Despite her optimistic personality, Akila generally has no issue with engaging in violence, and she even keeps a large assortment of weapons hung on the wall in her dorm room. She can be nearly just as fearless as Cleo, and in "Paradise Found," it is shown that she greatly enjoys the thrill of action as well. However, she prefers to find a more peaceful method to handle altercations if at all possible. This is evidenced in "Parasites", where she suggested to Cleo that they not attack the Parvites which were nesting on Mihos since they appeared to be civilized. Her weapon of choice is the standard Quaser, but in "Pirates", it is shown that she is capable in hand-to-hand combat as well.

When Cleo and Akila first met, Akila befriended her almost instantly. They share a dorm room at the academy, and despite being a neat and organized person, Akila appears to vaguely tolerate Cleo keeping the room such a mess, though it does annoy her. They have become very close friends, hugging each other very often. Akila has also become a strong source of emotional support for Cleo, and she does whatever she can to cheer her up. She is also shown to take care of Cleo when injured as well, like in "Team Building", when she nursed Cleo's broken foot. On occasion, however, Akila can become annoyed by Cleo's recklessness as well as her aversion to studying. There may be vague romantic feelings between them. Akila called Cleo her "girlfriend" at one point and Cleo kissed Akila, after her last bout of time travel, and then declared "I love you," at the end of the episode "Do-Over."

Brian, along with Akila, are considered top students at the Academy. In contrast with Cleo and Akila's fearlessness, Brian is the more neurotic member of the team, and is easily put off by dangerous missions. Brian has a crush on Akila, which Akila was largely oblivious to up until "Suspicion." Akila also realized that she had feelings for Brian shortly thereafter. Despite their feelings for each other, however, the two have a tendency to get on each others' nerves quite often. Brian is frequently annoyed by Akila's seemingly willful misunderstanding as to what a cyborg is in relation to a robot, as she appears to believe that there is no difference. Their first attempt at a date in "Cleopatra Needs Space" ended in failure due to their nervousness around each other as a dating couple. They eventually resolve that they are better off remaining friends, at least for the time being. Yet it is still clear that they still have feelings for each other. In the episode "Pirates", Brian blushed when Akila kissed each of his cheeks when pretending to be a French character.

Khensu is Akila's history teacher and since Cleo, they have become good friends, often meeting up when following or joining Cleo.

Before his arrival, she calls Zedge the "galaxy's dreamiest dreamboat" which Cleo doesn't understand. She is his biggest fan and he flirts with her and she does as well. He also speaks Vevoson. Her heart is later broken as he just wants to capture Cleo, but she comes around to him again when he is released from his mind control thanks to Brian, who had been skeptical about him for much of the episode ("Suspicion"). In later episodes, she still seems to have a crush on him.

For much of the series, Callie is mean to Akila, as she is to Brian, as they are both friends of Cleo, who she sees as her school rival, insulting her in episodes like Team Building. However, she is friendly with Akila in the episode "Savior". She later comes with Khepra, and Cleo to the arcade in the following episode, "Ladies Night". In that episode, she connects more with Akila, dancing with her as they play a dance competition game together.

Akila and Cleo in the episode, "Surprise."

Brian, Cleo, and Akila terrified of a monster in "Surprise"

Akila and Brian depending on Cleo in "Clubbing"

Akila, Cleo, Brian, and Khetsu fight side by side in "Humility"

Brian, Akila, and Cleo in the episode "Akila Says No"

Akila in the episode "Akila Says No"

Akila terrifying Cleo and Brian in "Akila Says No"

Akila and the mine field in the episode "Team Building"

Cleo, Akila, and Khensu together in the episode, "Team Building"

Akila and Cleo hugging in "Do-Over"

Akila with the visiting rockstar, who she has a crush on, in the episode "Suspicion"

Akila confides to Brian in "Double"

Akila and Brian dance in "Mihos"

Akila doesn't like the new "cool" Brian in "Cyrano"

Cleo and Akila are disturbed by Brian's antics in "Cyrano"

Akila unsure about Brian in "Cyrano"

Brian has temporarily fought back Cyrano in "Cyrano"

Akila is too happy in "Paradise Found"

Akila overjoyed in "Paradise Found" while Brian is annoyed

Akila sees angry Cleo in the distance in "Paradise Found"

Akila and Brian awkwardly approaching each other in "Cleopatra Needs Space"

Akila makes a dress for herself in "Cleopatra Needs Space"

Akila excited to see her moms in "School Break"

Akila feels like she is being left out in "School Break" 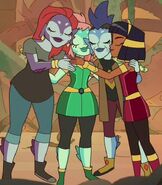 Theoda, Pothina, Akila, and Cleo all hug in "School Break"

Akila, Brian, and Cleo are glad to be called a "small expert force" by Yosira in "Xerxs Works"

Almost stepping in slime in "Parasites"

Akila and Cleo embrace each other in "Savior"

Akila and Callie dancing together in "Ladies Night"

Looks at Akila with concern in "Ladies Night"

Akila kisses Brian on the cheek in "Pirates"

Ostea realizes Akila is right about them being friends in "Pirates"

Akila starts a "family game" with Eyeball and Brian, in "Eyeball"

Terrified by traveling through the portal, as are Brian, Akila, Queed, and Zaid (in "Pyramid Scheme")

They get the signal in "Pyramid Scheme"