Khensu, Cleo, Brian, Akila, Callie, Dennis, Zaid, E'Geke-Ek-Gek, Administrant Khepra, Omnia, Zuzz, Lakshmi, Professor Klabrax V, Kek, Misti, Msumaki, Generator A.I., Gled, Gurp, Zedge, Philo, Professor Sitre, Yosira, Professor Jurval, and various others
P.Y.R.A.M.I.D., which stands for Pharaoh Yasiro’s Research Academy and Military Initiative of Defense, is the central galactic command force of Pharaoh Yosira, which was originally founded by her grandfather, Yasiro. It is primarily committed towards fending off Octavian's conquest of the Nile Galaxy, as well as recovering knowledge and information that was lost in the Blight. It is located on planet Mayet. It is also the location for the Academy in the Cleopatra in Space comic book series and the associated TV series.

P.Y.R.A.M.I.D. comprises both the Academy, as well as the nearby Mayet City located just across the river, which houses both Yosira's room and the chambers of the cat council. Students enrolled at the Academy are generally considered to be a front line of defense for galaxy, and as such, their educational curriculum includes combat training, as well as basic education in areas such as history, chemistry, and biology.

The Academy and nearby Mayet City are both protected by a large asteroid shield, which protects them from the constant deluge of asteroids striking the planet, as well as from intrusion of enemy forces. It is shown that the loss of this forcefield can have disastrous results, as it was accidentally drained by Cleo in "Clubbing," which nearly resulted in the Academy's destruction by an asteroid until she managed to get the A.I. Generator to turn it on again.

It is shown that Octavian is well aware of P.Y.R.A.M.I.D.'s location, and he has managed to successfully infiltrate it both by way of having Zaid serve as his spy to smuggle deadly mechs and other objects inside, as well sending a mind-controlled Zedge to capture Cleo in "Suspicion." The forcefield has seemingly always prevented him from sending a force to attack P.Y.R.A.M.I.D. directly, as suggested in "Pyramid Scheme," where it was only after Khepra disabled it that he sent in Xerxes.

The Academy serves as the home of Cleo after her arrival in the future, and it is the setting of many of the episodes in the series. According to Pakin Liptawat's concept art, the P.Y.R.A.M.I.D. council, called the "Cat council" for short, is located in Mayet City, is divided into four pyramids: Main, Command, "Tech," and Combat, while also featuring a courtyard.

Locations inside of P.Y.R.A.M.I.D. and the associated city

Bustling Mayet City as shown in the episode "Humility."

Entering P.Y.R.A.M.I.D. in the daytime in the episode "Wednesday"

Academy living quarters, the area the smoke is coming out of is the side Akila/Cleo's room is on in the episode "Wednesday"

Chambers of the P.Y.R.A.M.I.D. council in the episode "Wednesday"

Inside the building that contains the P.Y.R.A.M.I.D. council chambers in the episode "Wednesday"

Cleo, Brian, Akila, and Khensu walk around P.Y.R.A.M.I.D. at the end of the episode "Clubbing"

Far away shot showing the layout of P.Y.R.A.M.I.D and Mayet City in the episode "Clubbing"

Overarching shot at the end of "Quarantine"

Akila's "exact replica" of the Academy in the episode "Do-Over"

One of the alternate timelines gone wrong in "Do-Over"

Courtyard in P.Y.R.A.M.I.D. complex in "Suspicion"

One of the buildings of P.Y.R.A.M.I.D in "My Pharaoh Lady," with Mayet City shown in the background

One of the school's courtyards in "Double"

Meeting place of Cleo, Akila, Brian, Khensu, and Zaid to find the spy in "Double"

Academic buildings within which Cleo and Akila live, seen in "Rescue"

School buildings shown at the end of "Rescue"

Academy as shown at the beginning of "Mihos"

Snow begins to fall on the academy in "School Break"

Narrowing in on one of the P.Y.R.A.M.I.D. buildings in "Xerxs Works"

They get inside the Pyramids in "Pyramid Scheme"

Pyramids take off in "Pyramid Scheme"

About to go in a wormhole in "Pyramid Scheme" 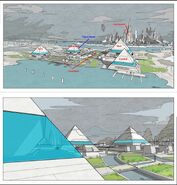 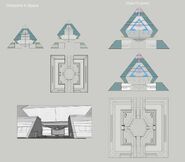