Multiple colors, a combination of blue, shades of yellow, and green

Surprise
The Sphinx Anti-Gravity Bike is Cleo's main form of transportation, which was created by Brian as a present in the show's second episode, saying it combines elements of the past and future. Cleo immediately loves it and speeds off into the distance with it despite a warning from Khensu. The bike has colors resembling those of her homeland in Ancient Egypt. It has since made many appearances, with Cleo even using it to rescue her school rival and stereotypical mean girl, Callie in the episode, Suspicion. It is revealed, in that episode, that the bike has laser cannons. In another episode, Akila goes to the cheapest fuel station in the galaxy to fill up the bike, indicating that it needs gasoline of some type to function.

The bike also makes an appearance at the opening of every episode, coupled with the series theme song, "Written in the Stars".

Cleo excitedly speeds away on her bike in the episode Surprise

Riding the bike in the episode Suspicion

Cleo's bike from the side as shown in Suspicion

The bike about to fire its cannons in Suspicion

About to step onto her space bike in "Cleo & Zaid" 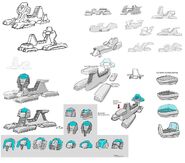