Cleopatra In Space Wiki
Register
Don't have an account?
Sign In
Advertisement
in: Locations, Nile Galaxy, Planets,
and 2 more

Fungus God, Teresians, Xerxs (formerly)
Tawris is a planet within the Nile Galaxy. On the orders of Khepra, Khensu sends Cleo, Brian (with his sentry), and Akila come to the planet and travel through the Bisu jungle to retrieve a data file. In the process, they fight with a legion of Xerxes, which capture Brian, Akila, and Khensu, with Cleo falling down into the indigenous peoples homeland. She later convinces them to fight alongside her to liberate the planet from the Xerxs.

This planet is covered in jungles and seems to be generally terrestrial. Various animals likely live on the planet, apart from the "Fungus God" and Teresians, nonviolent peoples.

Around a campfire at the end of the episode "Humility"

The planet at night at the end of the episode "Humility"

Indigenous dwellings in the episode "Humility" 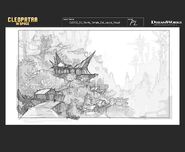 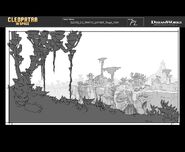