Cleopatra In Space Wiki
Register
Don't have an account?
Sign In
Advertisement
in: Males, Supporting Characters, P.Y.R.A.M.I.D.,
and 3 more

Zaid Antonius is a student at P.Y.R.A.M.I.D. and Cleo's love interest. Throughout the first season, he was a spy for Octavian who had forced him into servitude by holding his parents hostage, and Octavian mostly used him to kill or capture Cleo. He reveals himself as a spy in "Double", after which he is taken to the council for judgement and subsequently expelled from the Academy. He becomes an ally of Cleo's afterwards, eventually helping her find the UTA Tablet in the episode "Cleo and Zaid." In "Rescue," Clodswollader reveals that Zaid's last name is Antonius.

As described by Akila, Zaid is a "bad boy," a "rebel," and a "ne'er-do-well." As an Academy student, he maintained an aloof personality and was frequently in trouble for breaking the Academy's rules, such as hoverboarding and hoverblading on school grounds. In "Surprise," he openly cheated off of Cleo's history test, even after she encouraged him not to do so because she "[didn't] know anything," and later criticized her for her answers being wrong. Later, however, he sheds some of his distant personality to confide in her over missing his parents, though he lies and states that he is an orphan.

Although he is not truly bad or evil at heart, Zaid is more than capable of making morally ambiguous choices. As the son of former space pirates, he had standing and trust within that particular community, and in "Pirates," he uses this to join Amsaja's crew, which he does purely for money in spite of their malicious nature. He also showed a willingness to kill Cleo even if it meant endangering others in the process, such as in "Surprise" when he activated an assassin plant which attacked at Cleo's birthday party, and when he altered the safety protocols at Replicamp so that the simulated Xerxes could deal lethal damage in "Team Building."

A little taller than Cleo, he has darker skin than her, along with dark black hair, blue eyes. He occasionally wears an outfit suited for biking or using other motorized transport across the school itself. He generally wears a purple-reddish top with an downward facing triangle, grey-covered shoulders, yellow upper ar bands, black half sleeves, and black pants.

At first sight, Cleo is instantly infatuated with Zaid due to his good looks, rebellious personality, and his "flippy hair." During their first official meeting in "Surprise," they connect with each other over Zaid's claim that he is an orphan, which Cleo also claims about herself due to her travel through time. From then on, Cleo gains a tendency to fall into a stupefied daze upon seeing or thinking about him, as shown in episodes such as "Quarantine," where she almost fails to shoot him with a dart to cure his sickness after seeing him running towards her. Zaid starts calling her "Snakehead," in reference to her crown, which Cleo concedes resembles a snake in spite of being an ibis. Eventually, Cleo gains enough trust in Zaid that she enlists him to help with the search for the spy in "Double," even disregarding Akila's warnings against him. However, when Zaid finally reveals to her that he's the spy, Cleo angrily punches him, though he gains her sympathy after he admits that he was only spying to save his parents. In "Mihos", Cleo is briefly despondent after Zaid is expelled from the Academy, and even calls him her "crush," showing that she still has feelings for him. In "Cleopatra Needs Space," Zaid returns to the Academy as a visitor and gives Cleo information to find the UTA tablet. When this turns out to be a trap, Cleo worries about whether Zaid intentionally set her up, though she quickly comes to the conclusion that he didn't know. However, in "Pirates", Cleo is left distraught and furious to learn that Zaid had joined the space pirates, and even when he tries to rescue her and her friends, she remains hostile towards him, attempting to hit him with a plasma staff and pretending not to be able to see or hear him while he helped them escape, which Zaid interprets as immaturity from her. Later, Cleo saves him from Amsaja, and after the latter's crossbow shot ends up trimming his hair, Cleo once again falls into a daze over him, leading to her second fantasy in the episode where they go out together in a "blaze of glory" before being killed by the pirates, explicitly suggesting that Cleo would have been willing to die at his side. In "Cleo and Zaid," Zaid steals artifact called the Eye of Ra from the council's chambers to help Cleo find the UTA Tablet, which leads them to Dhargam, where they briefly consider remaining for all eternity (Cleo going as far as to imagine herself having children with Zaid). The eventually escape with the tablet, and after showing it to the council, Cleo loses herself and kisses him for the first time in reality, which after a double-check to ensure that it truly is reality, she kisses him a second time in front of the council.

Although they have never interacted in the show, Clodswollader, in the episode "Rescue says he knows Zaid from his pirate days, knowing Zaid's parents much better than Zaid, who was only a "kid" at the time he knew him.

In the episode Cleopatra Needs Space, Zaid talks with Brian about dating (specifically about dating Akila), understands his struggle, and tells him dating is hard. This is the first time in the series they connect.

Zaid is a skilled fighter and very good at marksmanship. He is also, presumably, good at sleuthing.

Zaid as a rage zombie in "Quarantine" 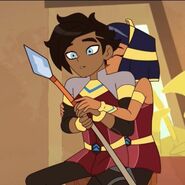 Zaid and Cleo getting close in the episode, "Suspicion" 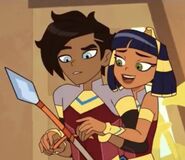 Cleo showing Zaid how to tie a spear in the episode, "Suspicion" 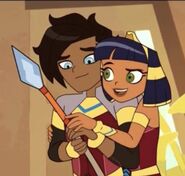 Zaid smiling at Cleo's affection in the episode, "Suspicion"

Zaid cheers for Cleo in "Double"

Cleo agrees to work with Zaid in "Double"

Cleo is enamored with Zaid in "Double"

Cleo is playful with Zaid in "Double"

Cleo trying to put the moves on Zaid in "Double"

Zaid lying to Cleo in "Double"

Zaid acting like he is saving Cleo in "Double"

Cleo excited by what Zaid says in "Double"

Zaid tries to be apologetic in "Double"

Zaid admits he is the spy to Cleo in "Double"

Zaid being apologetic in "Double"

Zaid helps Cleo get some juice in "Double"

Zaid in handcuffs in "Double"

Zaid in a viewscreen in "Double"

Zaid nervous after telling Cleo he is the spy in "Double"

Zaid tries to get Cleo to take a break in "Double"

Cleo pleads for P.Y.R.A.M.I.D. council to be lenient on Zaid in "Rescue"

Zaid pleads for Mercy in "Rescue"

Zaid taken away in "Rescue"

Dahab and Askari stand beside their son in "Mihos"

Zaid's parents stand beside him in "Mihos"

Zaid before the council with his parents in "Mihos"

Zaid surprised by the verdict, his parents are pleased in "Mihos"

Another image showing Zaid surprised by the verdict in "Mihos"

Cleo apologizes to Zaid in "Mihos"

Zaid accepts his fate in "Mihos"

Zaid says this isn't the end in "Mihos"

One of Cleo's imagined romantic moments with Zaid in "Pirates"

Another one of Cleo's imagined romantic moments with Zaid in "Pirates"

Zaid enters the scene in another of Cleo's visions in "Pirates"

Zaid explains what he did in "Cleo & Zaid"

Terrified by traveling through the panel, as are Brian, Akila, Queed, and Zaid (in "Pyramid Scheme")

Fights Xerxs with Cleo in the forest in "Pyramid Scheme"
Community content is available under CC-BY-SA unless otherwise noted.
Advertisement